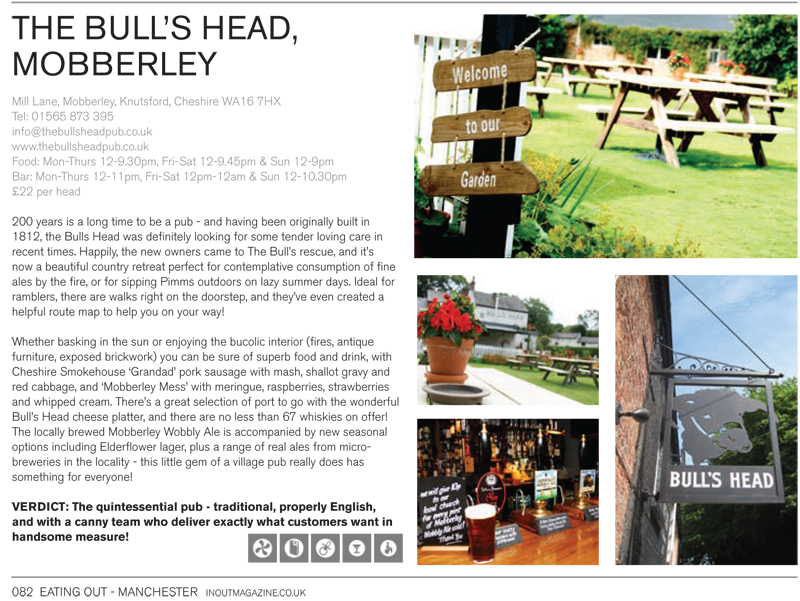 The Bulls Head started its life in the 18th century as three cottages for the village’s workers. Today it stands a popular hostelry, owned by Tim Bird and Mary McLaughlin and managed by Shane and Jenny Bushell who took over in May 2010. The team took on an impressive refurbishment job which is now complete, encompassing elements of the buildings original charm, modern facilities and contemporary styling.

Open all day every day, five real ales are on offer at any time with Mobberley Wobbly Ale and the Bull’s Head Bitter being the regular brews. An excellent range of guest ales are on rotation throughout the week, selected from local breweries within a thirty mile radius for that local taste. The Inn also stocks a handsome array of ‘posh’ ports, over fifty whiskies and wines to suit any occasion. Food is available all day, every day and includes a delicious selection of freshly prepared ‘Traditional sharing pub plates’, 28 day aged steaks and ‘Bulls Head favourites’ such as their legendary Steak and Wobbly Ale Pie, Cheshire Smokehouse Grandad Sausages with Mash or Local Ale Battered Haddock.

Every other Sunday afternoon you can enjoy ‘laid back’ jazz from their resident local musicians while on alternate Thursday evenings the ‘Lord Ted’ quiz allows guests to exercise their general knowledge skills. In the summer months the inn’s garden and terrace can be taken full advantage of for ‘al fresco’ dining and a game of boules perhaps! 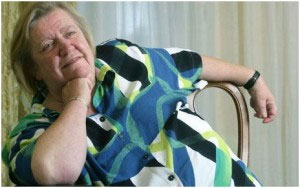 The Two Fat Ladies star picked the Cholmondeley Arms as her favourite pub in Cheshire!!

The Malpas pub, on Wrenbury Road, is re-opening its bed and breakfast rooms at the end of the month and Dickson Wright, who released the book â€˜Rifling through My Drawersâ€™ earlier this year, will be attending the celebratory event. A complete renovation of the pubâ€™s en-suite rooms is being completed throughout October.

In her latest offering, Dickson Wright pays particular attention to the Cholmondeley Armsâ€™ breakfasts. She describes her experience of mornings at the breakfast table as being: â€œconsoled by the hearty breakfastsâ€™

The breakfast also made it onto the â€˜10 best things Clarissa Dickson Wright has ever eatenâ€™ list, produced for a BBC Radio 2 show. 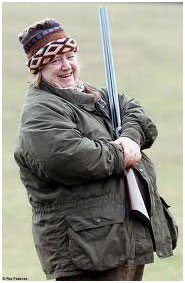 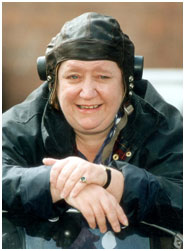