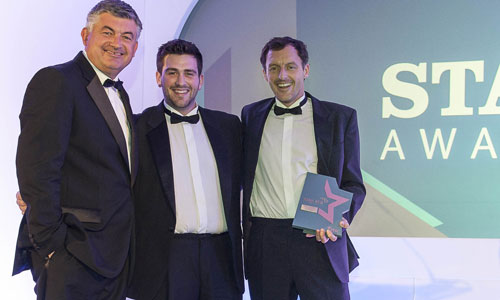 The Three Greyhounds Inn in Allostock has beaten off competition from 1300 other pubs to be named Best Food Pub in national awards run by Heineken owned Star Pubs & Bars this week.

Noting the pubâ€™s busy car park, the judges were impressed by how quickly owners Tim Bird and Mary McLaughlin had established the pub as a great place to eat within just a year of re-opening. Describing it as a â€˜shining lightâ€™, they also singled out the distinctive menu with its focus on food from British farms.

Indeed it was the opportunity to offer food at the Three Greyhounds Inn that attracted Tim and Mary to take on the pub and to invest Â£250,000 restoring it into a beautiful traditional pub serving excellent locally sourced food. â€œThe pub had been shut for four months and was in a sad state when we first saw it,â€ recalls Tim. â€œBut it had real character and as the only pub in the Allostock area was crying out for some TLC and to be turned back into a pub that the local community could be proud of.â€

The 300-year-old pubâ€™s history as a farm inspired Tim and Mary with the menu theme. The menu is a celebration of food from British farms with as much produce as possible from meat and vegetables to ice cream and chutney coming from Cheshire farms. For an added twist, the pub also specialises in British farm cheeses and offers a choice of eight brandies produced on a Somerset farm.

â€œWeâ€™ve been surprised and delighted by the variety of wonderful food being produced on Cheshire farms, from chocolate to asparagus, the quality is excellent,â€ says Tim.

The Three Greyhounds landlord James Griffiths and head chef Craig Wainwright received the coveted award at a gala celebration night from snooker champion John Parrott. â€œWeâ€™re humbled but very proud to have been selected to win the award. We didnâ€™t seek the nomination which made winning a great surprise and a real boost for our 25 staff and 5 chefs. Some people think that rundown pubs are a lost cause, this award helps us prove there will always be a place for a well-cared for traditional community local.â€

Tim and Mary are not resting on their laurels after their win, with plans for a private dining room, guest bedrooms and a regular farmers market at the Three Greyhounds Inn on the cards.

The Roebuck Inn - The Times

Foodie Treble achieved as we get ready for opening (again!)