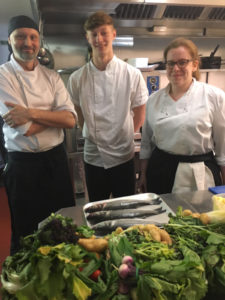 This year we decided to create our very own Master Chef competition! Open to all our Chefs at the Commis and Chef De Partie levels within the business.

The idea was to get our young chefs creating dishes that would suit the menus of the pubs in which they work, in the first instance and learn to cook with what is in season. They were also taken out of their comfort zone by arriving to the first heats not having any idea what they would have to prepare.

The competition started with two heats both were identical with all chefs having to make a soup from the ingredients left on the bench by our very own Marcus Wareing, Andy…Head Chef at the Roebuck Inn where all the heats were held this was their skills test.

Then it was seabass time………… taking a full sea bass and creating their very own dish after filleting the fish successfully this was effectively the invention test.

Finally they had to buy their own ingredients for a set price and cook a dish that meant a great deal to them. This was the ‘Own Dish invention test’.

The top Five scoring Chefs progressed to the semi-final on a lovely sunny day in May. The tension mounted as they first had to look at 10 ingredients and through sight, taste or/and smell guess the ingredients. This was probably the ingredients test was the toughest test to date with white radish, sorrel and baby water melons causing the most confusion! 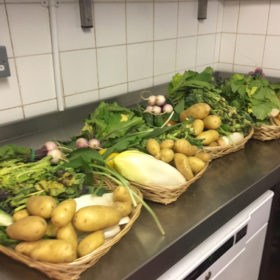 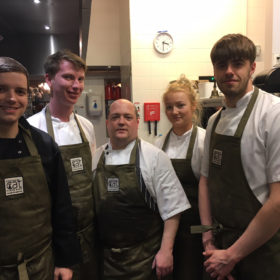 Once past this round the chefs had to make their own pastry in the pastry test……and they then had to create sweet or savoury dishes that included their lovely pastry!

Quiche and tarts followed aplenty and then it was on to the final round where the five chefs had to cook a dish from scratch again from costed ingredients that they had bought locally. This was the ‘Dish invention test 2’ .

Adam from the Fitz, Jack from the Church Inn and Arak from the Roebuck Inn scored the higher points to make it through to the final leaving Callum from the Three G’s and Mark from the Bulls Head to go back to their pubs having done a great job but not quite ‘smashing it’.

In true Master Chef style Arak dropped out before the final allowing Mark to take his place. Sadly Mark couldn’t take up the challenge for personal reasons so the final was held between Jack and Adam and the Final date was set in sunny June.

The final task was to cook a three course meal that would suit the menu of their pub…..a signature three course meal. The judges were Mary and Tim, with Andy and Jess from operations and Ed and Adam from our wine suppliers Boutinot.

It was a tough task for the judges let alone the chef finalists……but both chefs did an amazing job. The scores were 769 to Jack and 768 to Adam….there was a further two recounts before Jack was confirmed as the winner…..it could not have been closer.

We are very proud of all the chefs that took part so a big thank you to them. They all showed creativity and skill while learning a lot at the same time.

Well done to Jack, a very good win for a junior chef which made his teammates at the Church Inn very proud of him.

Here’s to next year!​

The task was for all Junior Chefs to bring new burgers to the table that would differentiate from our original house burger. First up was Jack from the Bulls head the Bulls head they went for a trio of burgers twist with a Lamb Tikka, Sweet Potato and Pepper and Thai Fish burgers 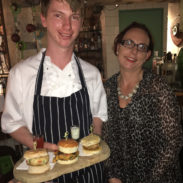 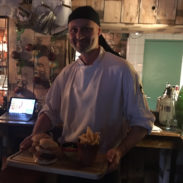 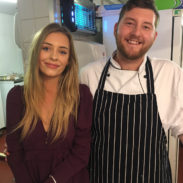 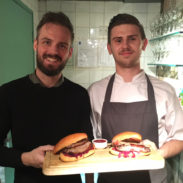 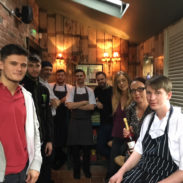 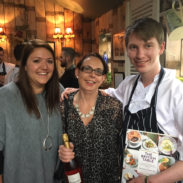 Next up was Arek from the Roebuck who created a Pork burger with bacon and a spicy cheese and his own twist on a Marie Rose sauce. Chef Sam and Charlee from the Fitz created a Spicy Chicken and Blue Cheese burger. Then the Three Grey hounds were up with Chef Jack and Andy creating a trio of burgers, one being our standard House burger and the other two being a Chicken, Brie and Cranberry burger and a Portabello Mushroom and Halloumi burger with a red onion marmalade.

Chef Joel and Chris from The Church Inn originally planned to do a burger consisting of lobster but due to delivery issues they had to improvise and created a Venison and Sausage burger with braised red cabbage.

All five teams came up with some great ideas, their creativity and innovative ideas will be used in our future menus. But Jack and Bulls Head Deputy Steph flavours won the day as well as originality! All the teams did well with some good flavours and innovative offerings! Thank you to all the teams for taking part and we will see you at our next cook off in the New Year.

The task was to be creative with Sandwiches and specials for our lunch menus. 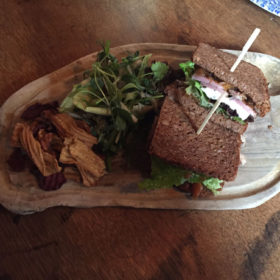 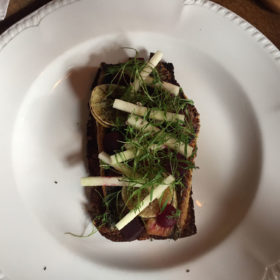 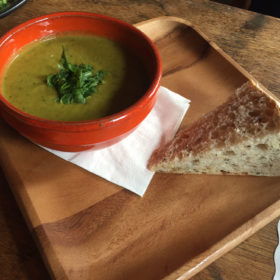 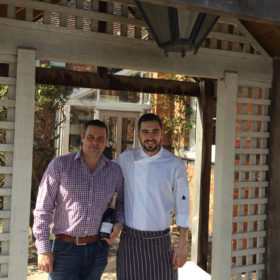 First up was the Fitzherbert Arms who made the most delicious wild garlic soup! Using locally picked wild garlic with mint and homemade parsnip crisps. Next up was the Cholmondeley Arms, who presented a delicious vegetarian sandwich option of Avocado, minted goat’s cheese and beetroot on toasted sourdough with a soft boiled egg and a homemade duck pastrami, mozzarella and peach pickle sandwich.

The Three Greyhounds made a beautiful Ham Hock and apple, with a fried duck egg on granary toast and a cup of Spiced Sweet Potato soup.
The Bulls’ Head made a tasty, and delicious super food soup and a British pastrami and pickle sandwich.

The Church Inn had created a game consommé and came up with the idea of the Cheshire Cat Rarebit. The idea of a bar nibble of rarebit on toast with a half of local ale served at the bar throughout the day.

The Roebuck wow’d with their homemade focaccia, an open mackerel and beetroot sandwich and a toasted ciabatta with Artichoke, smoked mozzarella and pistachio pesto.

All six teams came up with some fantastic ideas. Their imaginative elements will be used on our menus in the future! It was a very close call but the winners for the second time running were The Cholmondeley Arms! Watch this space for new additions to our lunch menus very soon!

The task was to re-create the sharing plate and all the competitors came up with some brilliant ideas. First up was the Fitzherbert Arms, who added some great elements to their Pub Plate including a wild boar sausage roll with a homemade roasted red pepper and chilli jam.

Next up was the Cholmondeley Arms. Ollie and Leigh decided to recreate the concept of the Pub Plate and made a Cholmondeley ‘Garden Hamper’.

The Three Greyhounds went for a plate that took traditional pub elements and made them into sharing portions.

The Roebuck Inn took a different twist on the challenge and presented a pudding sharing plate—all of the puddings reflected their bistro roots.

All four teams came up with some fantastic ideas. Their imaginative elements will be used on our menus in the future and they were all very creative! It was a very close call but the winners were the Cholmondeley Arms with their Garden Hamper!
Watch this space though, as new pub nibbles will be on all of our menus soon!